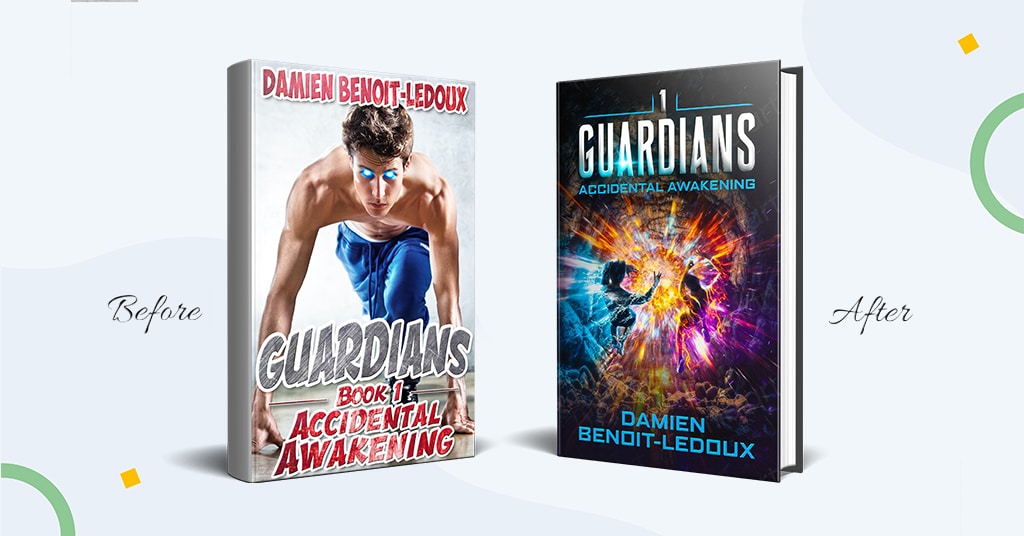 You are here because you believe in your book and want more readers to enjoy your creation. There are a few things you can do to boost your book sales besides tight storytelling and world-building. However, the most straightforward, quickest, and arguably the cheapest method is an attractive, modern book cover design.

Read along to learn how changing visuals helped one writer to grow the fanbase, how to determine whether it’s time to invest in a new cover, and what makes book cover redesign effective. Also, stick around for some real-life redesign examples.

How to Know It’s a Time to Redesign Your Book Cover?

In 2016, a now best-selling author J.F. Penn had 4 novels, 6 short stories, and 4 audiobooks in her portfolio.

However, she realized that her book sales could do much better. Thus, it was time to do some marketing and ramp up the numbers of ebook and audiobook sales.

After diving deep into the business aspects of selling what you’d written, J.F. Penn concluded that the best solution was to:

“Know your target audience and package products in a way that will appeal to them.”

It meant that she had to redesign her old book covers, even though the author and her fans loved them.

After repackaging her books into covers that cater to the target audience much better, J.F. Penn achieved the following results:

If you are wondering whether your books can do so much better with a new cover, here are the questions you should answer.

1. Does My Book Cover Meet the Genre Expectations?

Genres and their respective book covers have conventions to follow. For instance, thriller fans’ eyes are hungry for that special book cover design: intriguing, grim, soaking with character, masterful.

Imagery, colors, typography, text layout of such a book cover should belong to the genre.

You can’t slap a traditional fantasy font on a mystery book cover and expect people to get it. As well as you’d rather not use a tender color palette on a horror book cover.

A nice example of a genre-intuitive cover is “The Forgotten Chronicles” by Jason J. Nugent. We believe you won’t struggle to guess its genre.

If your book cover design is not clear about its genre, it needs a redesign.

2. Does It Evoke the Right Emotions?

If your book already has a genre-friendly cover, the next question is whether the cover communicates desired emotions.

A potential reader craves not only a good story but also certain feelings:

Of course, a reader’s desires can be complex and combine a lot of different “wants”. However, you need to choose a focal feeling that your book cover design should evoke.

Your two main tools for communicating the right emotions are book cover design colors and imagery.

For example, red and black work great for implying danger.

3. Is Text on a Book Cover Visible?

Whether it’s the title of the book or your name on its cover, they should be glaringly visible, like a Frodo with the Ring on his finger to Sauron. Well, maybe not to that extent, but the idea stands:

Readable text that attracts attention will help you to build your author brand and make sure that the title of your book leaves its mark in the mind of the audience.

This is a great example of typography that attracts attention and does not negatively affect the atmosphere.

4. Does it Look Masterful?

The art can look sloppy on purpose to invoke certain emotions or communicate the themes of the book well. The font may look tilted, and color selection may feel slightly odd if they serve the purpose. However, the combination of these elements should always feel harmonious and persuasive.

On a masterful cover, each separate element and their combination work well and never feel out of place.

If you think your book cover looks rough around the edges or amateurish, you need a book cover redesign.

5. Is Your Book Cover a Catchy Thumbnail?

For better or for worse, most books are like videos on YouTube: they need a catchy thumbnail to get millions of views.

It’s a tricky task. On the one hand, you need to ensure that your book cover follows the conventions of the genre. On the other hand, it should be distinct enough to stand out from the crowd. Finding the proper balance between the two requirements is what we strive to accomplish with our covers.

A nice example is “Sands of Reckoning” by Janeal Falor. The cover screams fantasy and yet remains distinct and eye-catchy.

6. Do Your Sales and Number of Reviews Grow?

Do you believe you can sell more books? We believe the answer is yes.

Of course, your sales may stagnate. However, it doesn’t mean that the Universe decided to punish you or your book is bad. It means that your creation needs a little boost.

You can write a hefty thousand-page book on book marketing. However, such a simple step as redesigning the cover of your book has an impressive ROI of time and money.

Also, if your book has been on the market for several years now, new visuals are a sure way of breathing new life into it. (For more tips on getting more readers, read here).

If your answer to any of the aforementioned questions is ‘No,’ then your book probably needs a new package.

As J.F. Penn put it, if you are an indie author, you have “the privilege to change things.” Thus, go ahead and use this privilege to the best of your ability.

Now, to the juiciest part of the article — actual redesign cases by Miblart.

Over the years of providing book cover design services, we’ve had our fair share of changing how texts look.

1. “League of the Lost” by Vic Sandel

“League of the Lost” is a suspense action fiction that tells a story of a horrific adventure the junior baseball team has to endure after their plane crashes in the swamps of the Mississippi delta.

While the synopsis of the book tells a potentially thrilling story, the original cover fails miserably to do so.

We decided to maintain the idea of the cover as it has potential. To redesign the cover, we

“Jaben’s Rift” is an Epic Fantasy that involves trans-dimensional teleportation, the ancient prophecy, might, magic, and Scotland. All the good stuff, which can’t be said about the original cover.

To enhance the visuals of the book, our designers

3. “A Commission on Murder” by Cheril Thomas

“A Commission on Murder” is a mystery novel about a woman sleuth who tries to untangle a strange death in the old farmhouse.

The book has everything detective mystery connoisseurs may want. However, the original cover does not.

To redesign the cover, our designers

Also, take a look at the flock of birds in the right corner of the cover. The flock doesn’t distract and adds a nice touch to the author’s name. Such tiny details often make a big difference.

“Lemuria” is a science fiction/horror story that combines the wonders of tropical paradise with the terrors of the unknown and distorted.

It is a suspenseful novel that needs an equally suspenseful cover. Though the original cover was half-way there, it failed to deliver the desired result.

It was a comparably subtle redesign of the book cover, during which our designers

We saved the most radical book redesign case for the end.

“Guardians: Accidental Awakening” is a fiction fantasy about LGBTQ superheroes. It has teenage drama, self-exploration journeys, action, suspense, and superheroes — a full package.

Such a book required a capable attention-grabber that the original cover failed to deliver.

In essence, we created new visuals from scratch.

It was one of the rare cases when we decided to be bold with colors. Adding a lot of colors is always a challenge. But, the composition turned out beautiful. Besides, the explosion of hues created a nice focal point and nicely contrasted the text.

Book cover redesign can seriously increase your book sales and attract new readers to your writing with a minimum of investments. You just need to know when and how to approach this nuanced task.

If you need any help with affordable book cover design services, hit us up with a letter. Also, feel free to leave comments if you have any thoughts on the matter.