This package offers many advantages for authors: a consultation with our creative director, two book cover design concepts to choose from, marketing materials, and discounts from our partners. Moreover, the premium design provides heavy photo manipulation, 3D modeling, and digitally painted elements that will bring your book’s fictional world to life.

Today’s case concerns “The Third Way of My God” by Michael R. Schultheiss, and we can’t wait to share impressive results.

We are honored to say that Michael R. Schultheiss is our repeat customer. He already ordered covers for the previous parts of The Rosteval Saga and finally returned for the cover for the third book, The Third Way of My God.

As for the author’s desires, Michael wanted to see his protagonists, both Rosteval and Ghaitta, on the cover again, dressed as they are on the cover of The Spiral of My Destiny. He also offered to add some elements of light and darkness to speak to the key theme. Other than that, the author was open to our ideas.

Fascinated by the plot, we made two different versions that still flawlessly continue the previous books and harmonize with them. Let’s see the designs in detail. 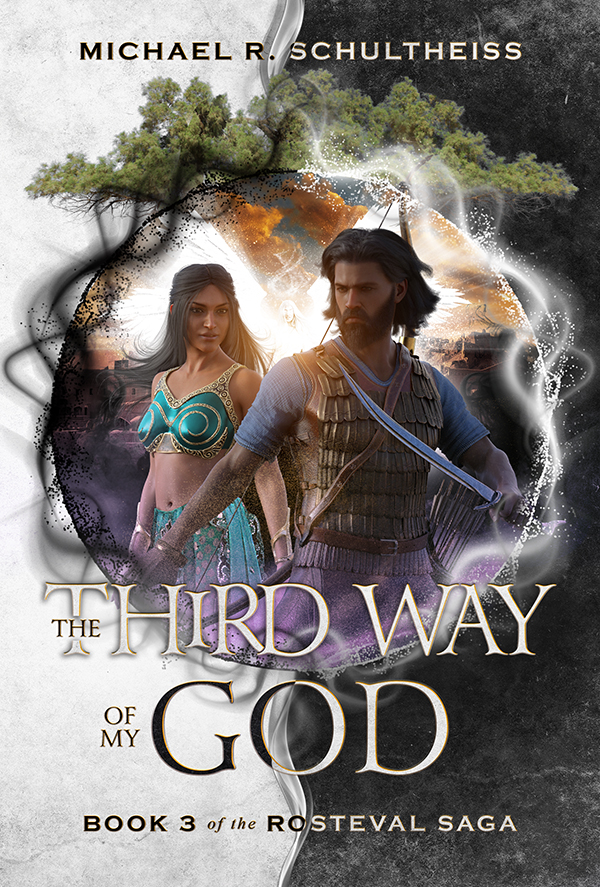 Here, we continued the series look by adding the new book’s main elements. This version’s theme is the contrast between the forces of light and darkness, which attributes surround the protagonists in the center.

Behind the characters, you can see Goddess with clashing armies and legendary hinting at events in the new book.

As the author requested, we used the main characters’ clothes from the previous part. But the designer changed their positions to make them look different and suit the composition.

The typography continues the style of the series. But here, we also played with black and white colors to symbolize the forces of light and darkness. 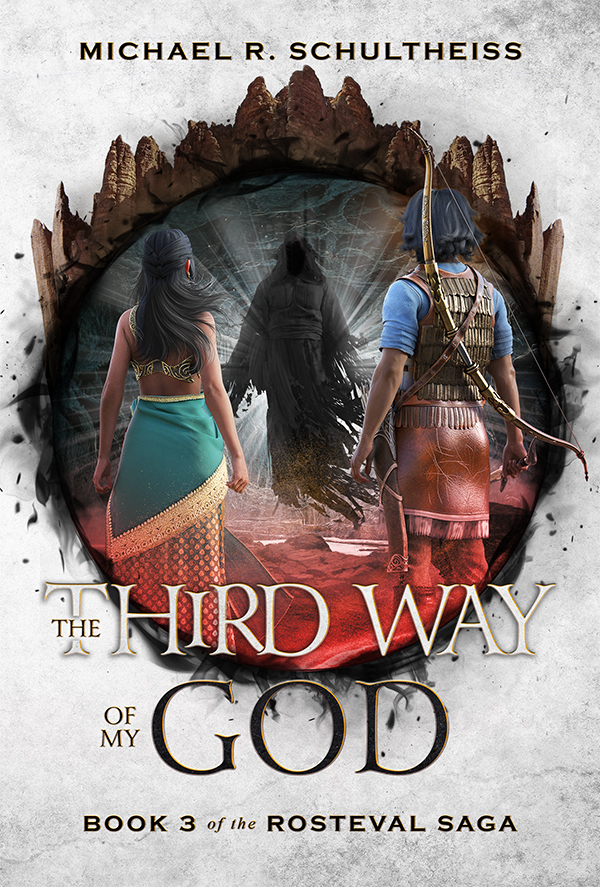 Protagonists dressed in the same outfit stand with their backs to the viewer. They look toward the dark figure. This approach creates a tense cover story and conveys a sense of danger and challenges to the characters.

We played the title in black and white colors but split it horizontally. The typography continues the style of the series. The book cover looks very clean and without extraneous elements.

We were pleased to hear that Michael R. Schultheiss adored both concepts a lot. However, he decided to go with the second version. Michael liked the intense atmosphere and the dark figure that perfectly connects to the core of the book’s plot. More than that, the author even didn’t want to change anything.

Both book cover versions look like portals through which the reader can enter the fictional world created by Michael R. Schultheiss. At the same time, the concepts are pretty different.

The first option showed the characters in the foreground as if a man was protecting his woman. Here, we also showed a strong contrast between the forces of light and darkness with black and white colors.

In the second concept, we wanted to create a more intense atmosphere. The protagonists’ gaze at the dark figure adds to the effect of struggle. A circle stylized with rocks and dark magic tells about the settings and events described in the book.

Have these book covers impressed you? Share your opinion in the comments.

I really love this design! You did a wonderful job!

Thank you! It’s a pleasure for us to hear such kind words.