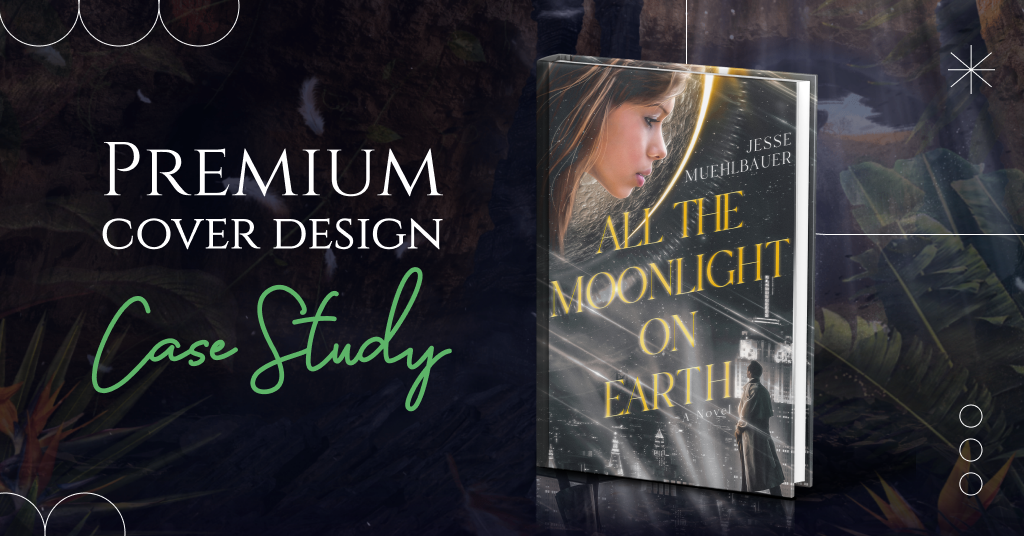 The moment has come — we’re revealing the new premium book cover design and the process of its creation.

We also want to remind you that by ordering our unique package, you get a consultation with our creative director, two book cover design concepts to choose from, marketing materials, and discounts from our partners. The premium design includes heavy photo manipulation, 3D modeling, and digitally painted elements to bring your book’s fictional world to life.

Jesse Muehlbauer shared his vision of the book cover and added some images as references. The author had the following requirements:

We appreciated all the author’s comments as they helped our designer to understand the task better. Now, let us show you how we saw this book cover. 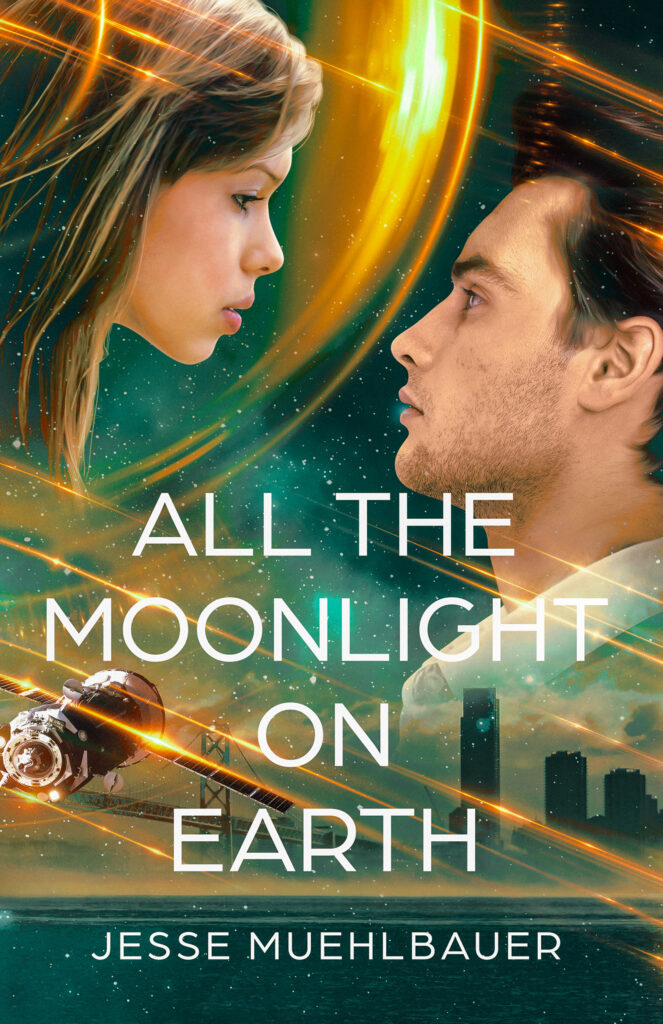 The first concept includes the characters in close-up where their emotions are clearly visible. Spaceships in the background and the city show readers the environment where the events take place. These images also highlight the science fiction genre.

The yellow glow of the moon draws attention to the main characters. The green color of the background highlights the necessary contrast. Moreover, yellow-orange lines add dynamics to the cover.

We chose a simple but clear and elegant font that is perfectly readable against colorful images. It also fits perfectly into the genre. 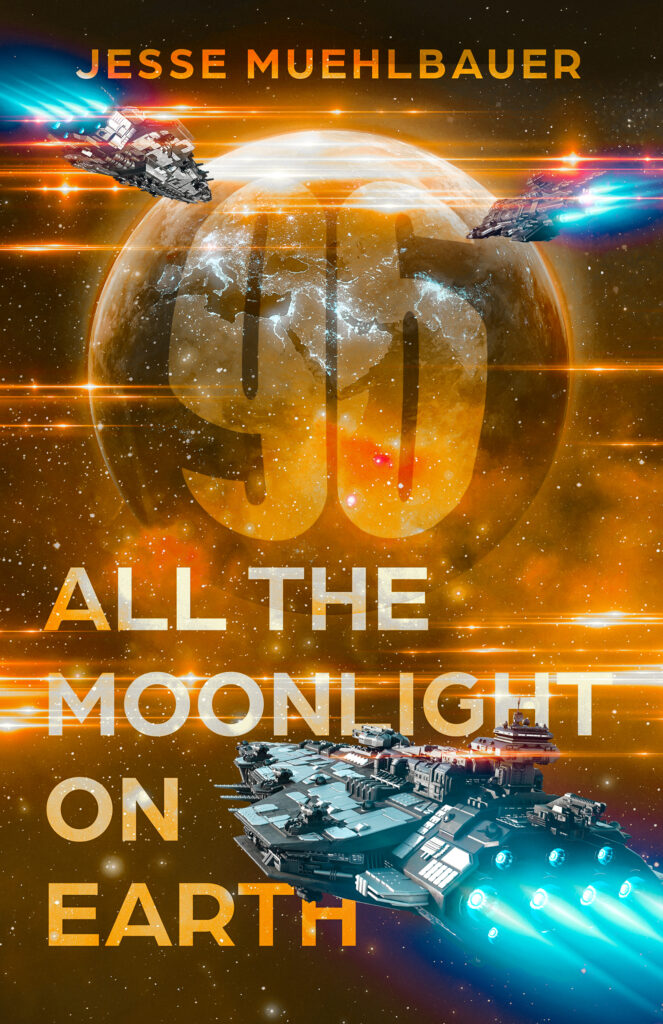 This version is more stylized and has more hidden meanings. As an alternative, we offered an option without characters at all. In the center, readers can see the number 96 as a symbol of A Sputnik that orbits the globe every ninety-six minutes. This figure fits perfectly into the planet and grabs all the attention.

Cool and warm hues create excellent contrasts, and spaceships in the background help to immerse yourself in the atmosphere of science fiction. This version contains bright, attractive elements and shining pieces that make it prominent.

For this cover option, we also chose a sans serif font that is perfectly readable and suitable for the science fiction genre.

Jesse Muehlbauer and his team liked the first concept. The author also shared what he enjoyed most in this design:

The writer also offered more recommendations on how he wanted to improve the first book cover concept. So let’s get to work. 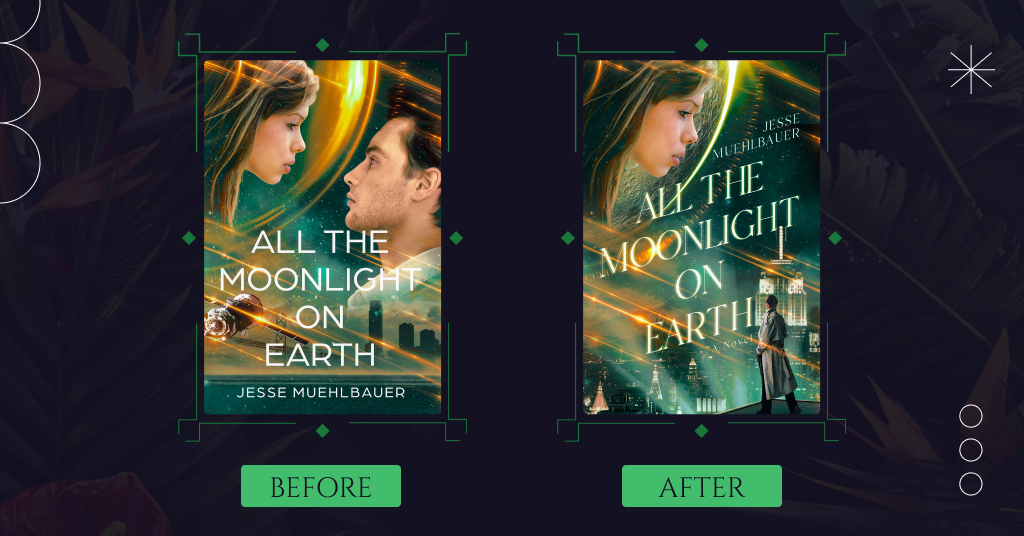 We removed the male character and expanded the noir atmosphere by including night city views with skyscrapers. Our designer also added a pair of noir searchlights.

Silhouette of a man

Instead of the male side profile, we added a silhouette of a man in a trench coat. He is looking up at his daughter.

Our designer changed the look of the sphere around the girl as it looked like a space helmet instead of the moon.

Instead of the previous option, we used glowing serif font and placed it diagonally. It fits perfectly into the new composition.

Also, we removed the satellite as it didn’t correspond to the actual image of Sputnik from the novel. Then, our designer added the word ‘novel’ under the title.

Jesse Muehlbauer asked us to make most of the book cover black and white for the final version. Exceptions are the moon, the girl, as well as the title, and the author’s name. And now you can enjoy the results! 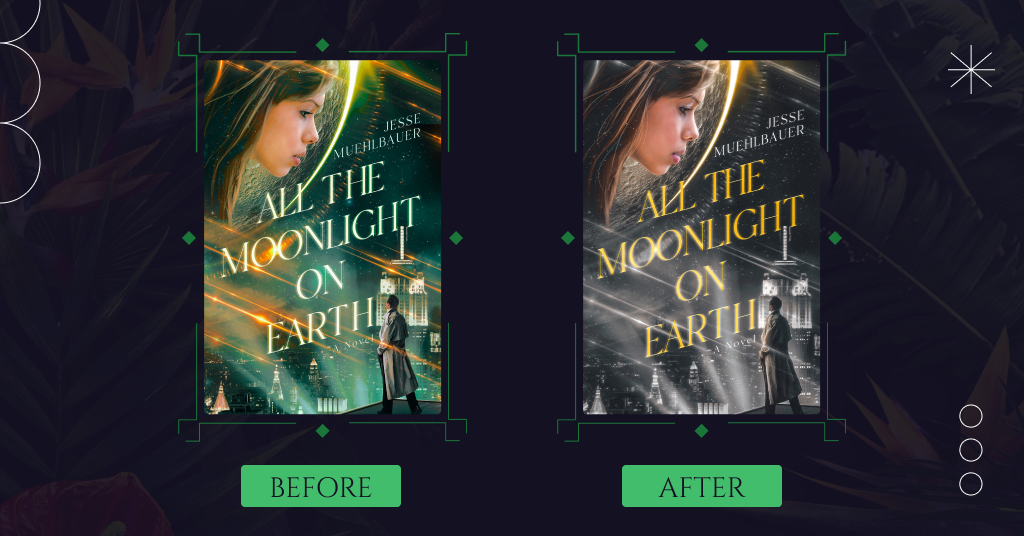 The final book cover version is spectacular. It corresponds to the genre standards and appeals to the target audience.

The concept includes an image of the main female character and a silhouette of a man who appears to be her father. Readers see night cityscapes in the background, which creates a noir atmosphere. The glowing orange title is perfectly readable against the black and white image and harmonizes with other colorful elements.

And what do you think about this book cover design? Share your thoughts in the comments.