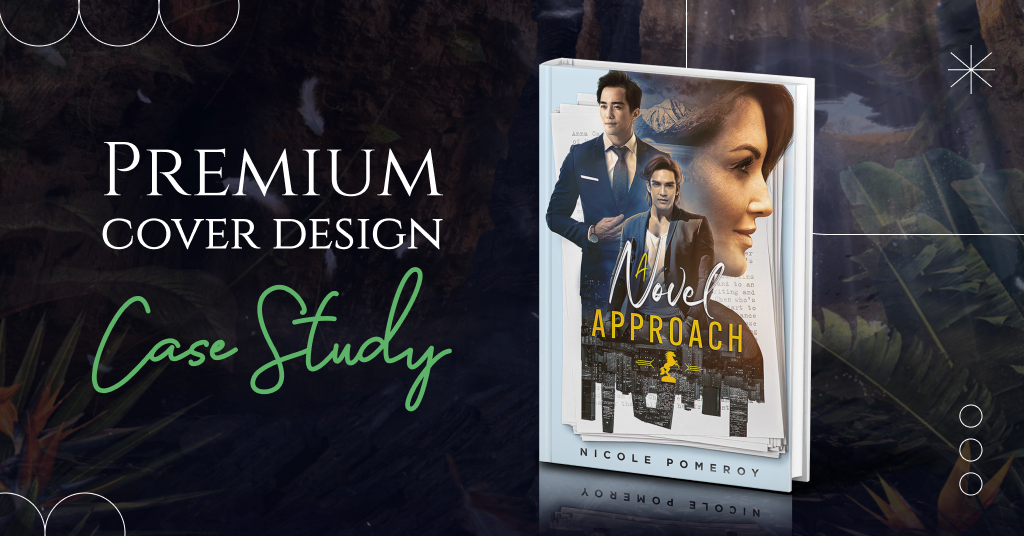 Today we want to share the process of our new service – premium book cover design.

This service boasts a wide range of advantages for authors. It includes a consultation with our creative director, two book cover design concepts to choose from, free book promo images, and discounts from our partners.

Get ready to enjoy our book cover design for a multicultural romance A Novel Approach by Nicole Pomeroy.

While working on this book cover, we focused on the leading characters because the story revolves around their love triangle. After analyzing all the author’s answers and comments at the initial stage, we made two mockups. They weren’t the final book cover design but helped to understand the right direction. 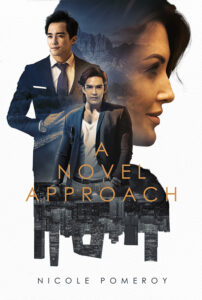 The first version includes realistic images of the leading characters that let readers imagine what the heroes look like.

We portrayed Anna in a large size to emphasize that she is the main protagonist. The author mentioned such an essential detail: Anna is a woman from the mountains of Montana. That’s why we added the double-exposed picture of scenic peaks. Also, we included skyscrapers to highlight the events occurring in the megacity.

Then we depicted Xiao Chen and Wei Xian as smaller because they are described as secondary characters. It allows readers to get a better look at their appearance. These elements balance the composition perfectly.

We chose a light and neutral background and readable sans serif fonts not to distract readers’ attention from the characters. 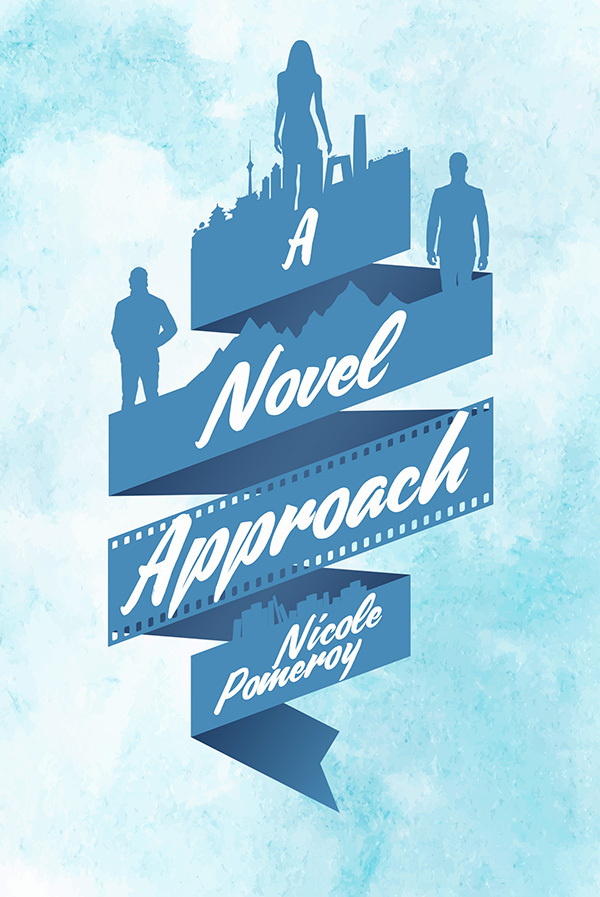 The second version is more stylized and contains more hidden meanings. All the elements form a complex vector composition. We depicted the main characters with silhouettes to let the readers visualize the heroes.

Placement of the characters

Pay attention to the specific placement: Anna is at the top as the protagonist, Xiao Chen is a bit lower because Anna meets him first, and then Wei Xian goes. The vector tape also attracts attention and hints at the events described in the book, from the mountains and the city to the scriptwriter’s career and filming.

The light background helps to concentrate readers’ attention on the main characters. We also chose a decorative script font. And the final touch was blending all the elements and adding some textures.

Nicole Pomeroy has decided to go with the realistic book cover mockup #1 as she feels it best suits her book. Also, she is planning to continue this story with two more books and make a trilogy. The first version of the book cover design fits this aim perfectly.

What did the process of further work with the client look like?

So, we’ve found the right track and got some comments on how to make the book cover perfect.

The author sent us a couple of sample photos of the Montana mountains. It helped us to depict the landscape as realistic as possible.

The title seemed to get lost in the background a bit. That’s why we decided to highlight and change it with a heavier font and added brighter and more contrasting colors.

It was essential to hint at Anna’s profession. The author also gave us a clue: The protagonist wins the Golden Horse Award in the book. So we included the image of this film award and added script pages to the background. 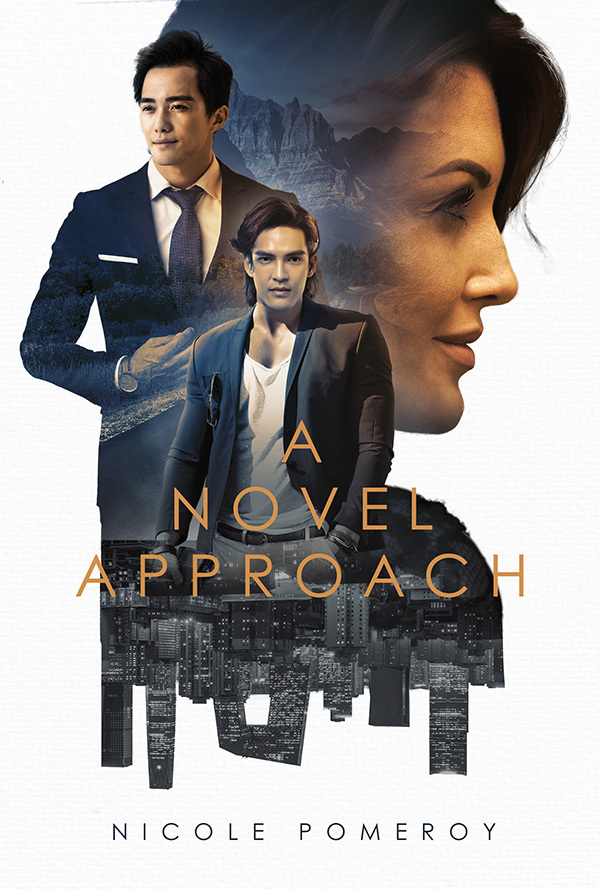 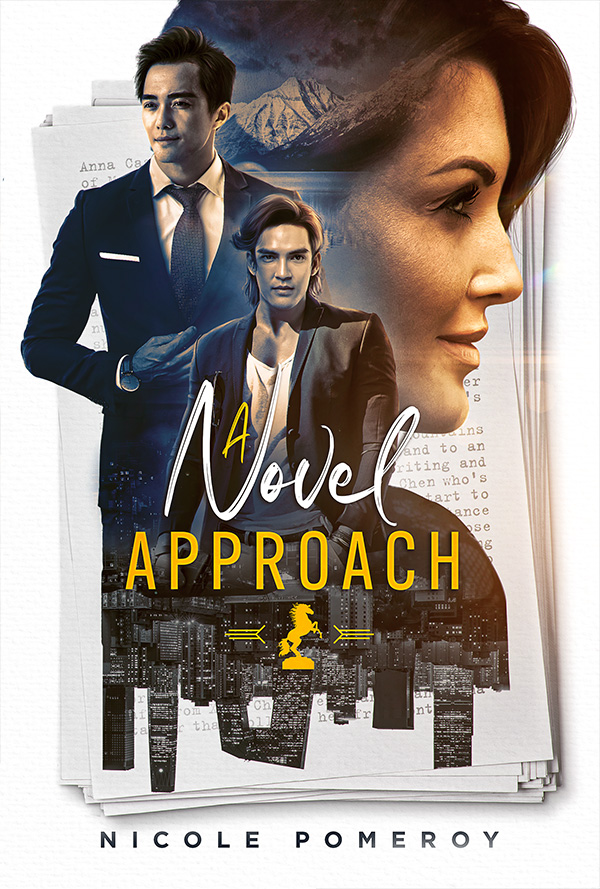 What about the final result?

Obviously, there is always room for improvement, and the author’s word is supreme here. We were glad to do the tiniest corrections as we understand the importance of the book cover for the writer:

And now, we are ready to present the final version of the book cover for Nicole Pomeroy’s new book. 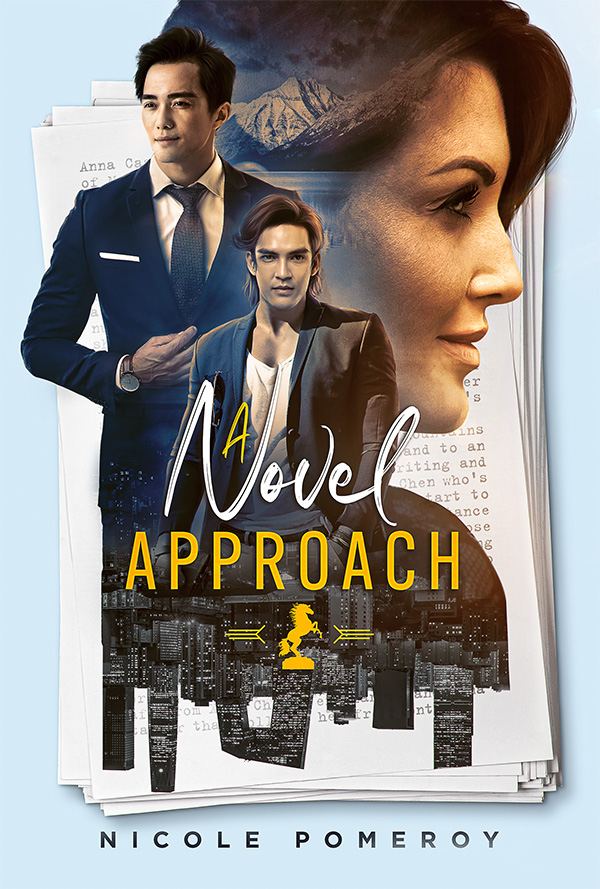 What about marketing materials?

In this case, Nicole Pomeroy has chosen 5 promo images. We use the final book cover version as a basis for all marketing materials. Let’s take a look at them.

Our designers prepared two different versions of the Facebook banner. The first one provides the images from the book cover.

The second version gives an idea how what hardback and ebook look like. We also add a book slogan here.

This promo includes a paperback image with the Montana mountains in the background. We added the book’s title at the top to draw attention and the tagline at the bottom. 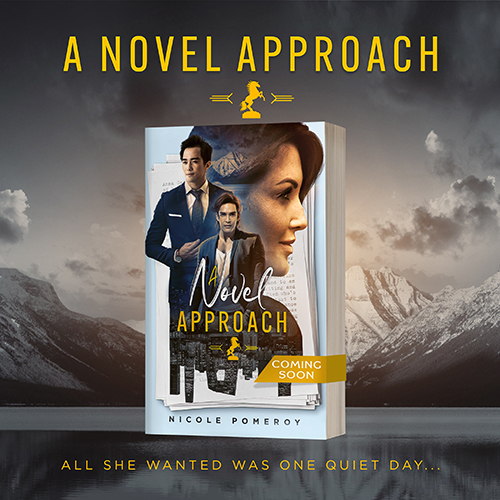 A cover reveal image is a powerful marketing tool that helps intrigue readers long before the book’s release. That is why we depicted a book wrapped in paper, where the book cover is barely visible. We also added the book’s title and logo. 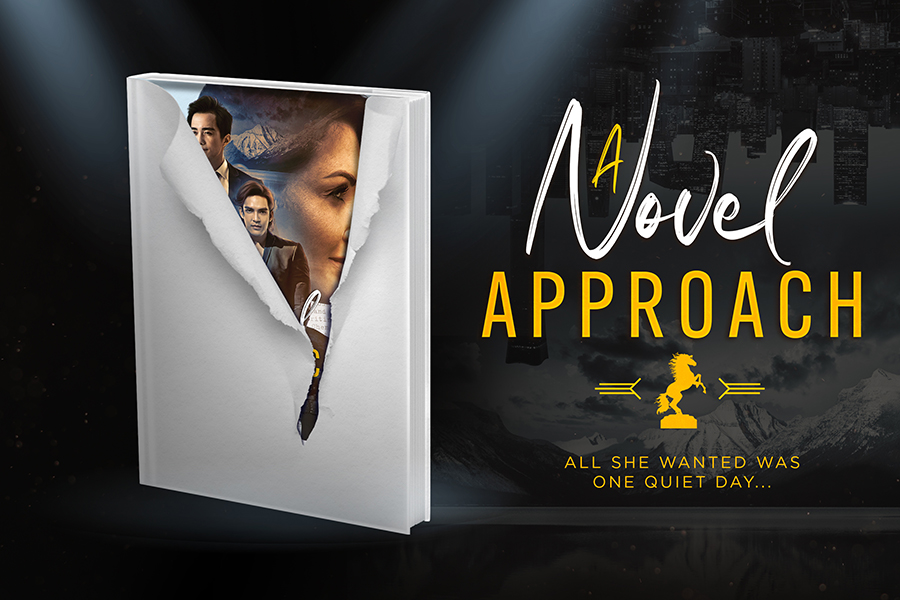 A bookmark is an excellent bonus for readers and an essential thing when immersing in the story. We separated the forefront and background of the book cover to create a vertical, elongated design.

We got a stunning book cover and eye-catching promo materials at the finish. The author preferred a realistic design that allows readers to imagine what the characters look like. We also added such elements as the mountains of Montana, skyscrapers, script pages, and the Golden Horse Award to hint at the events described in the book. The light blue background has a hidden meaning too: Montana (the protagonist’s native place) is called the Big Sky State.

We absolutely love the final result. And what do you think? Share your thoughts in the comments.

You're In!
Check out your email to confirm the subscription and get ready for amazing staff in your inbox!
Close
5 3 votes
Article Rating

It is an elegant cover. It is clean, crisp and depicts the story/characters well, such that the readers of this genre, who are drawn to multi-cultural themes, would be easily persuaded to go for it. To sum it up, I like it. Edita A. Petrick

Thank you, we’re glad to hear you like it. This cover is really stunning and elegant!

Hey all, as this is about my cover, I should be the first to comment.

I LOVE, LOVE, LOVE my cover. The process was fast and amazing. I was super excited with each change and update they made, finding my vision for me.

The staff was helpful with suggestions and responded quickly when I had suggestions or changes. Everyone that sees the cover has raved about how professional and eye-catching it is. I will definitely be using this service for my future books, two more in this series and several more beyond. Super excited to continue working with MiblArt.

Thank you, Nicole, for your kind words! It was a pleasure working with you. We look forward to creating covers for your new books!