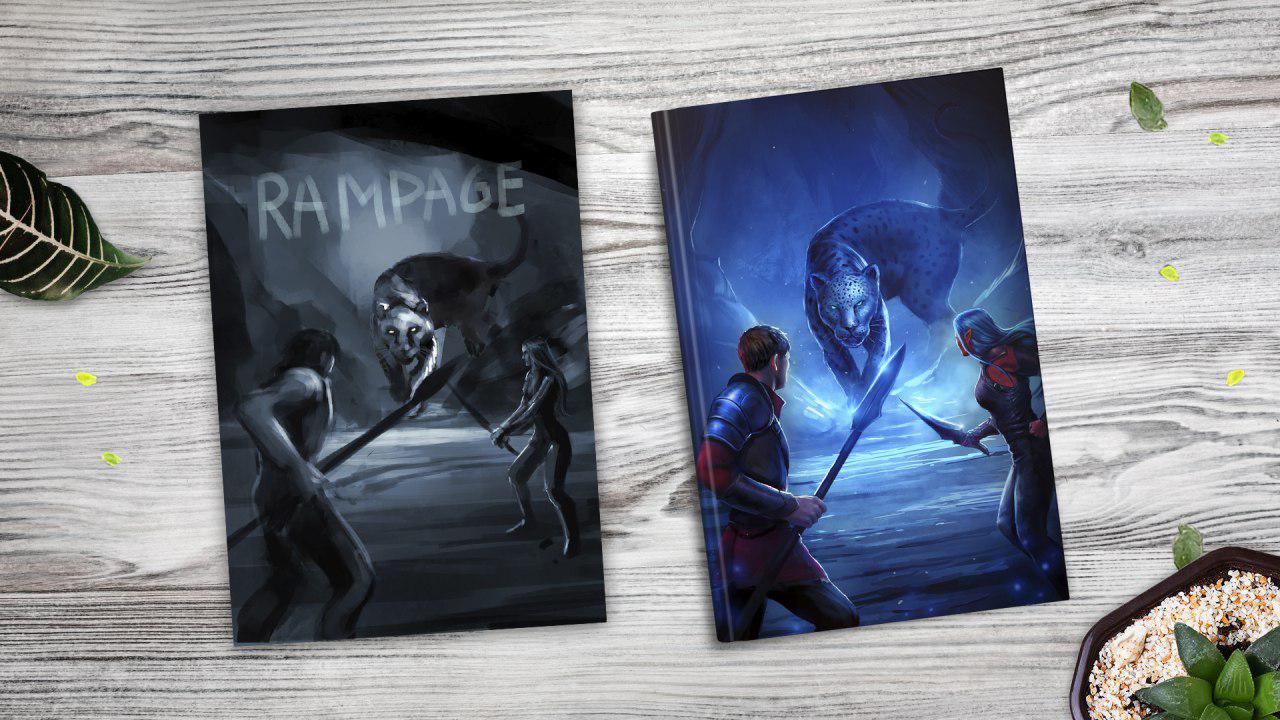 Just recall the moment of your birthday or Christmas morning when you hold the present in your hands. You don’t know what’s inside, but a beautiful wrapping intrigues. You may ask what does it have in common with an illustrated book cover design? I’d say, it works the same way.

An illustrated book cover is like a gesture of care and thoughtfulness. Readers haven’t assessed the writing yet, but they see the cover that evokes some particular feelings. It’s like a bunch of special words chosen for your subtle conversation with a reader.

Illustrated book cover design: how it makes your book unique

So, what is an illustration in a book cover design?

The concept refers to drawing an image rather than using and customizing a photo. An illustrator creates content to visually interact with an audience. Illustrated book cover design conveys the message of writing. It is one of the methods to design a contemporary book cover.

Thereby, you may be wondering:

“What are the benefits of illustrated book cover design over custom imagery for me as a self-published writer?”

Look at the following reasons:

An illustrator creates imagery according to your request and thoroughly selects the color scheme to fit the overall mood. So, it is aimed at capturing readers’ attention. It enables them to associate your writing with book cover design. Illustration enhances the feeling of your personality, unlike customized stock images.

The illustrated book cover may be as detailed as you want it. Some unique elements can be added to the customized covers. Yet, they look less organic than initially created parts of imagery.

Illustration impresses. It looks winning, indeed. Such a cover is different from the ordinarily customized one. It’s like a piece of art that wraps your writing.

Illustrated book cover design imparts particular energy to your work. Using illustrated covers for the design of books boosts the sense of the author’s distinctiveness among other writers. Thus, it improves the audience’s experience and knowledge of your works.

Illustration serves as an effective tool to convey abstract ideas and interact with readers. The illustrated book cover does not limit the audience’s visual perception. Unlike stock imagery, it avoids constraints, appeals to the imagination, and makes a book memorable.

When you already know the benefits of the illustrated book cover design, it’s time to find out the steps of its creation. Get to know more about how the set goal turns into reality in the black-and-white sketch. Look at their transformation into a colorfully illustrated cover with typography.

Illustrated cover design gives a visual representation of your writing. The illustrator conveys the main plot lines with pictures. Thereby, a detailed depiction of the characters highlights their nature. The illustration aims to show the atmosphere of the book and drawing an audience’s attention to it. Minding preferences of the potential readers simplifies the creation of illustration.

When an illustrator knows the details, which should be on the cover, the process begins. The initial sketches are black and white. They serve as a pre-made version for the final illustration. It enables both the author and the designer to agree on their vision of the concept and revise inconsistencies.

As soon as the sketch is approved, the illustrator can color it. Our clients indicate what palette they want to use, but illustrators can make corrections and add some other hues to evoke emotions. A thorough combination of a color scheme shows the mood of the genre. The use of tints and shades refines all the illustration details.

The final step of the book cover design is the typography choice. The illustrator selects the font and its color to reflect the book’s tone of voice. It is adjusted to the overall composition of the illustration.

So, it’s time to have a look at the illustrations MiblArt team has recently created.

It is a fantasy book. The main character is a twenty-eight-year-old girl. She is blind, so the bandage on her eyes symbolizes it. The girl has a pet, a soft little monkey, which is important for the plot. The events take place in Ancient Egypt. For this reason, the main character’s look as well as the pyramid in the background inform a reader about it without extra words. This information is enough for the first sketch, and this is how it looks like: 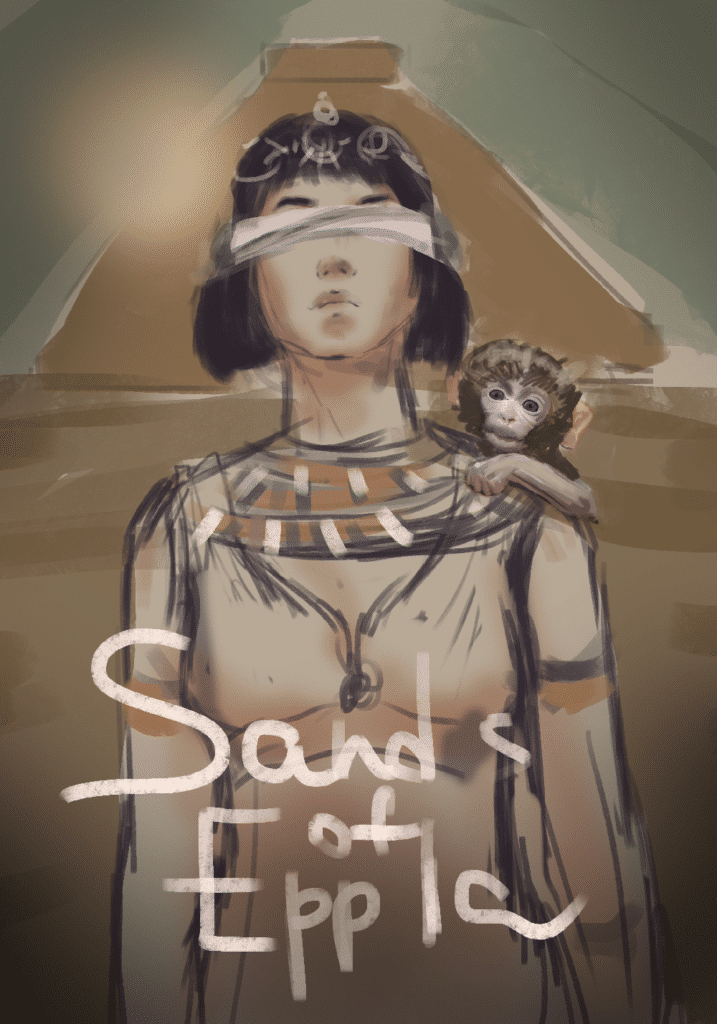 So, the illustrator continued structuring and adding the details. She transformed the pyramid by drawing steps. The realistic sky appears in the background. The girl’s appearance also alters. Her dress and necklace get more fancy and sophisticated.

The author has requested to illustrate two characters, fighting a jaguar. A detailed depiction of a man and a woman, elements of their clothes, and actions, as well as a specification of the animal, simplifies the design of the first sketch. The characters’ movements are clear and the jaguar’s actions look lively. 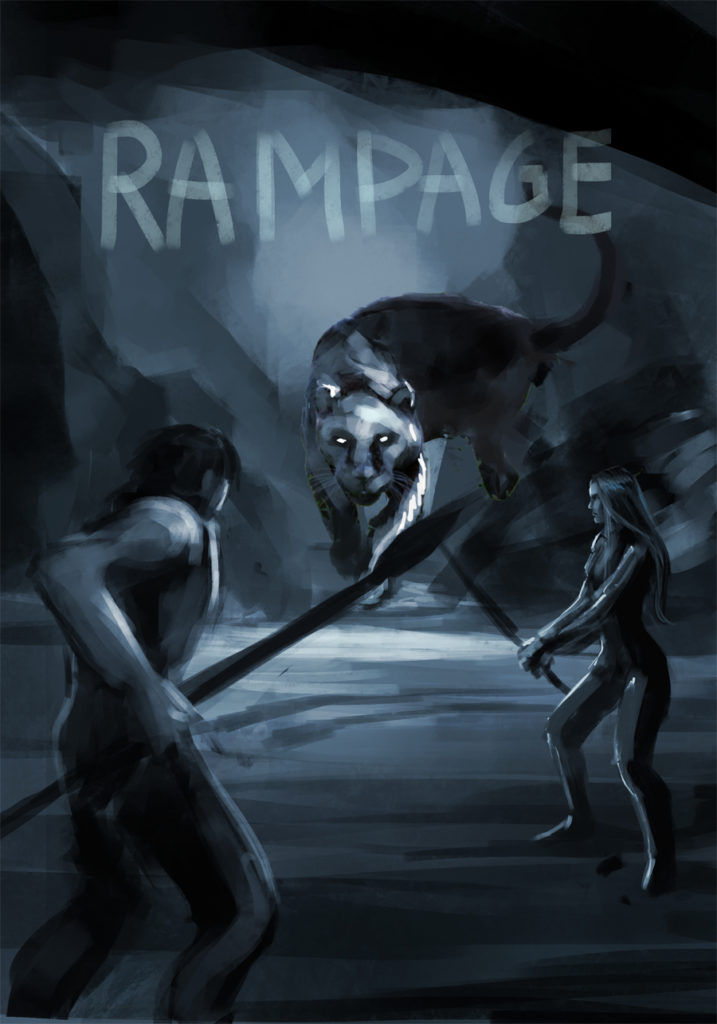 Moving further, the illustrator uses colors. The writer indicates blue, brown, and black as a prevailing palette. Additionally, the design of illustration is improved because the illustrator creates a dark cavern with torches as the author mentions it. 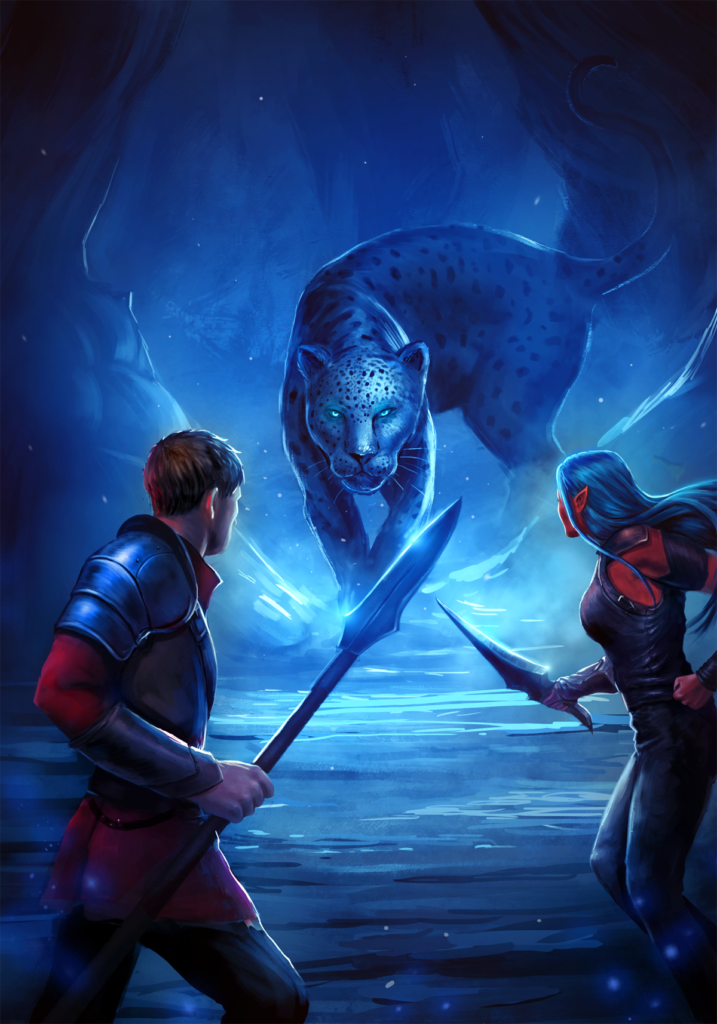 The novel is about a seventeen-year-old girl. The author gives a detailed description of her appearance. Additionally, she emphasizes the movements and feelings the girl experiences. An illustrator depicts a tower with a bell in the background to show the settings. A sparkling ball hints at the genre of the book, letting readers know that it is fantasy. 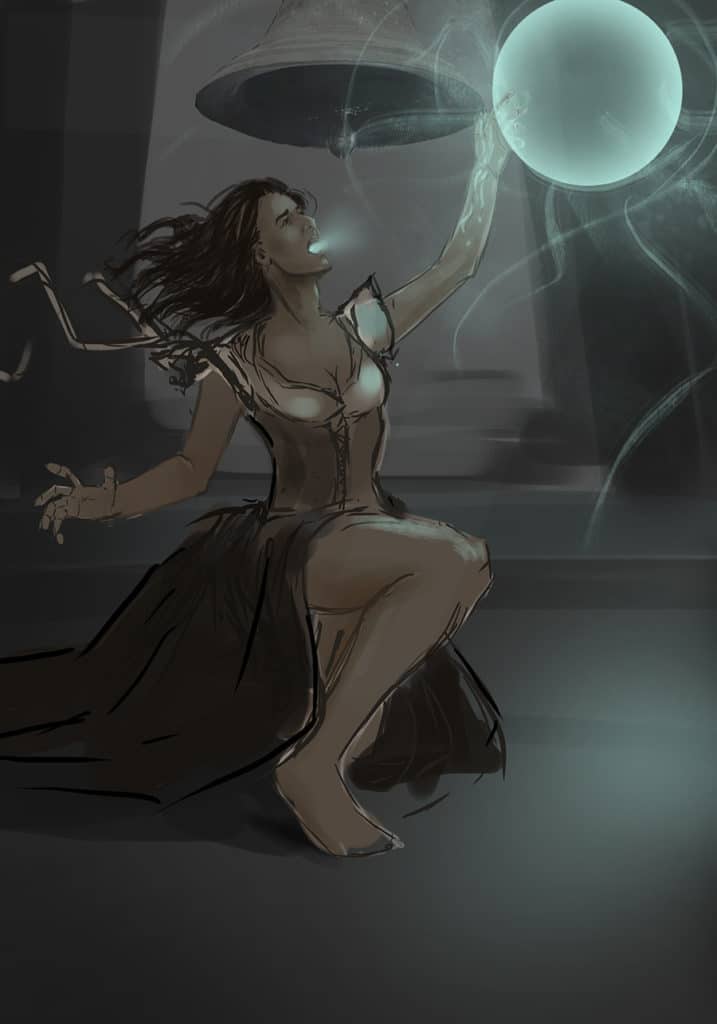 To complete the illustration, the designer uses a requested color palette. He applies lights and shades to draw attention to the important elements of the book cover composition. We highlight them to reveal some ideas of the plot and intrigue the audience. 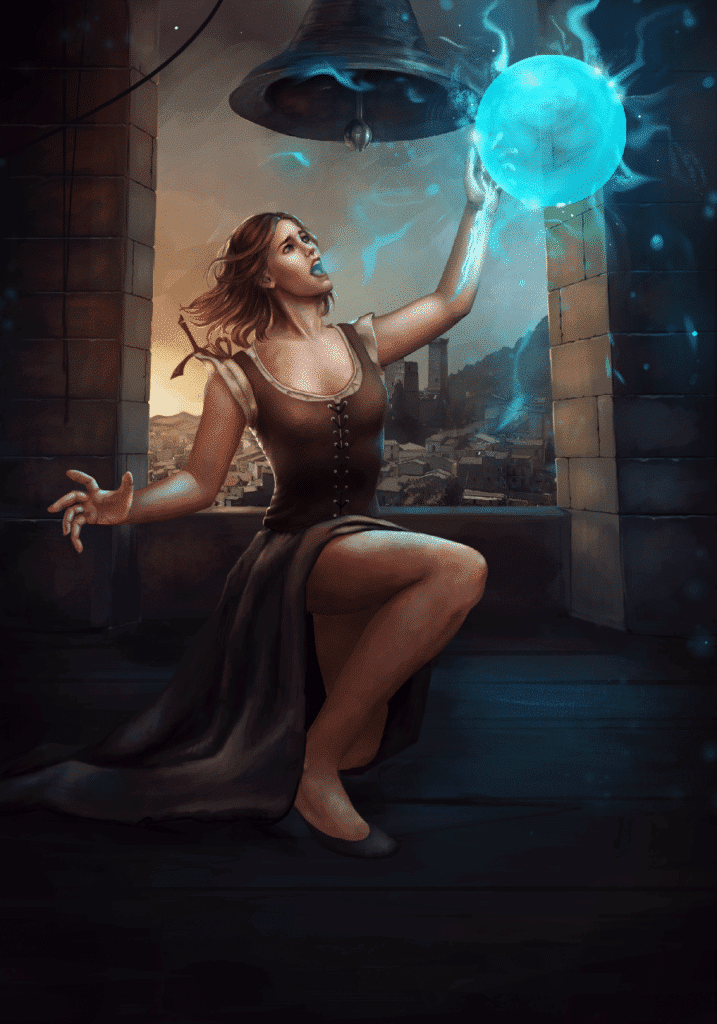 At last but not least, illustrated typography is an excellent choice for your book cover design. A designer uses illustrated elements and adds them to typography. It certainly gives a unique touch to your book cover because you can manage the process and modify each letter as you see it. You receive more opportunities to apply your creativity and impress the audience with a fascinating and exceptional cover for your book.

Wonder to look at illustrated fonts for book cover design?

We’d like to show you one of our best examples. So, this is A White Horizon: Stars and a Wind book one by Barbara Gaskell Denvil. It’s a series of the Norse fantasy where magic is mixed with arctic cold to create a special atmosphere of the novel. Viking princess Skarga faces her cruel father’s discretion in black magic. So, she has to muster all her strength to withstand human violence and natural phenomena.

What is the writer’s instruction?

The author requests typography illustration without figures or characters for her book cover design. Barbara specifies that she wants it to be Celtic art with such elements as eagle claws or snakes to convey the sense of dark fantasy.

Everything should get a frozen look to show the nordic mood, blending white, soft blue, or soft turquoise. The writer emphasizes the importance of upper and lower cases of lettering with a textured background. Ultimately, she decides to use custom hand-drawn fonts because it is aimed to embody the main character. 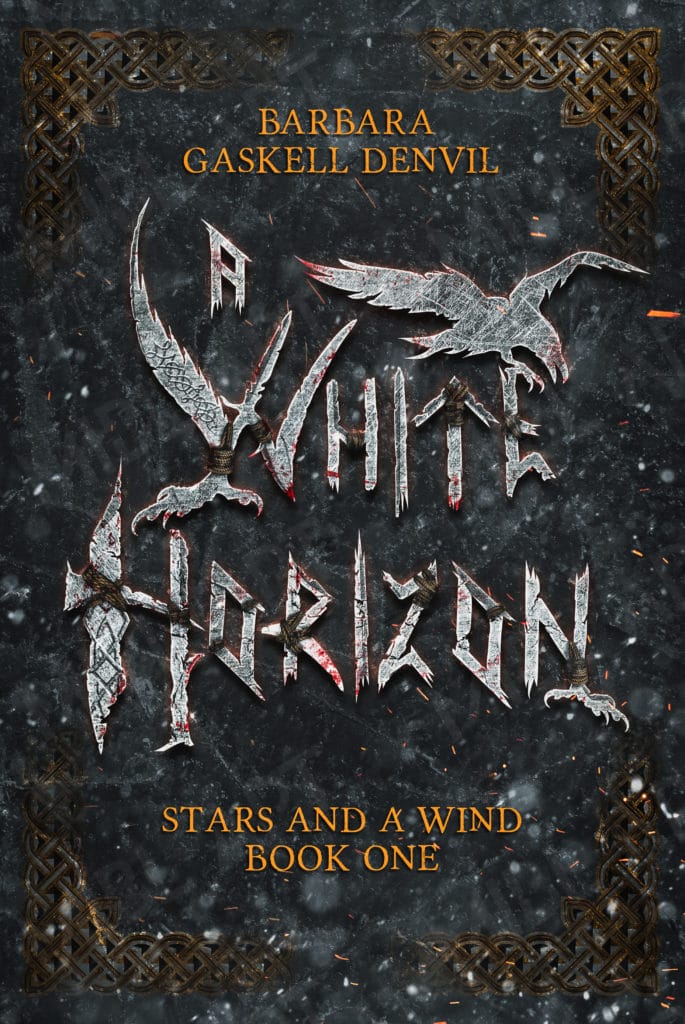 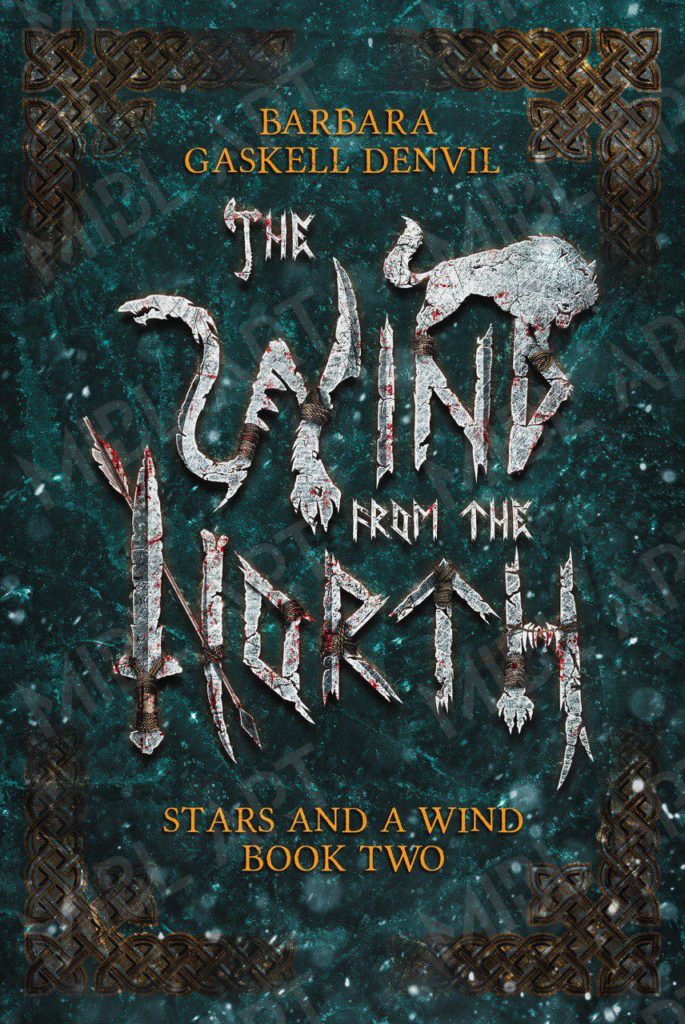 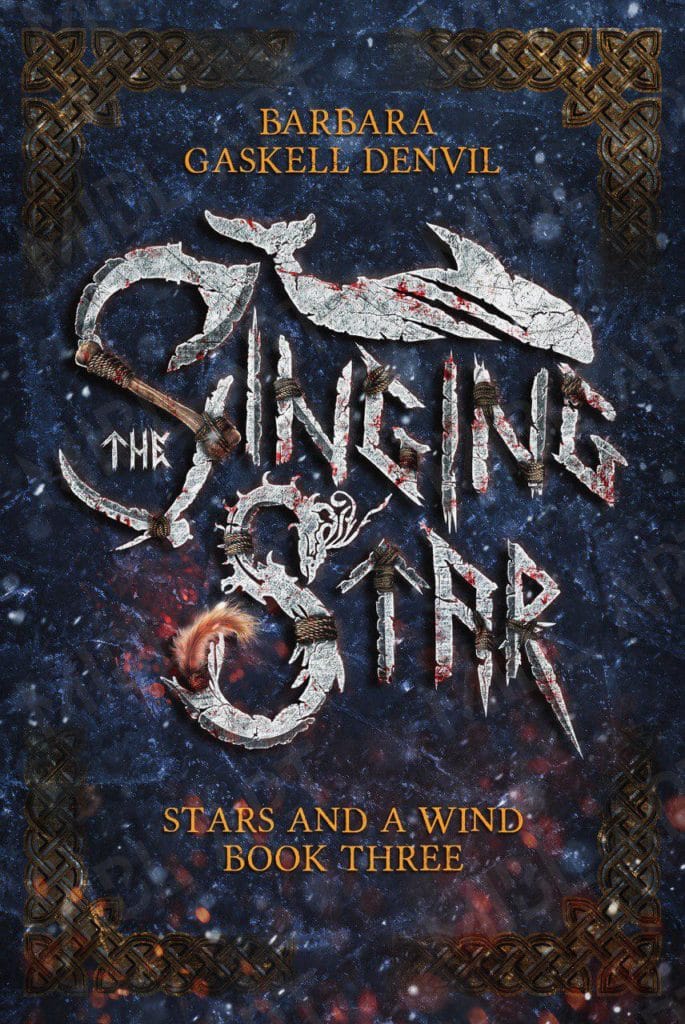 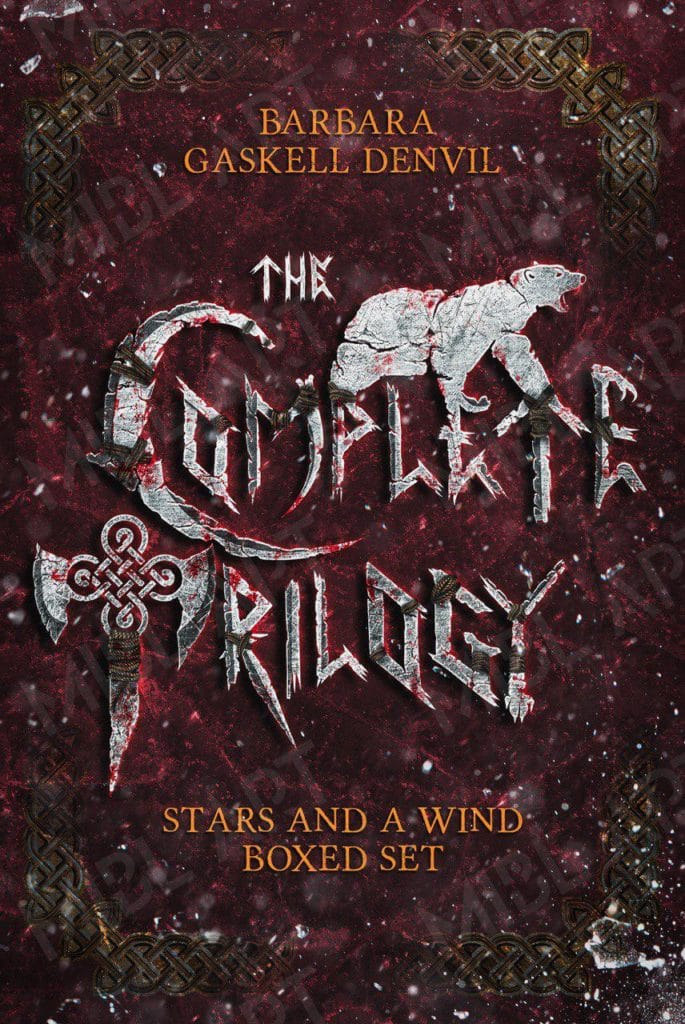 The illustrated book cover design is an outstanding adjustment to your writing. You’ve already learned about its advantages and elements significant for its creation. We hope you have enjoyed the sketches and final versions of our works!

You're In!
Check out your email to confirm the subscription and get ready for amazing staff in your inbox!
Close
3 2 votes
Article Rating