How to come up with a book idea: Try these 7 effective ways

You’ve been sitting at your desk for two days, but a new book idea hasn’t come to your mind yet. Is this normal for a writer? Does it mean that you are not a real author?

We boldly declare: It’s absolutely normal. Sooner or later, every creator faces this block. Fortunately, there are various ways to remedy the situation. And today, we’ve prepared an effective instruction on how to come up with a book idea.

In the article, you’ll learn5 ways to develop a book plot as soon as possible and 2 methods to get the bottomless sources of book ideas for years. Let’s get on with it.

If you can’t survive without writing for a single day, or there’s a literary competition on the horizon, you may need a book idea right now. Here’s how to come up with the book plot today.

1. Take one of the eternal themes

The point is that there are no untouched themes. People have been writing stories for more than 9,000 years, and we don’t even speak about just telling the stories orally. So let’s be honest: You won’t invent a new topic no matter how hard you try. However, you can take one of the eternal themes and make it unique by adding extraordinary settings, characters, and events.

Thus, the first step is to choose the topic that echoes in your soul. 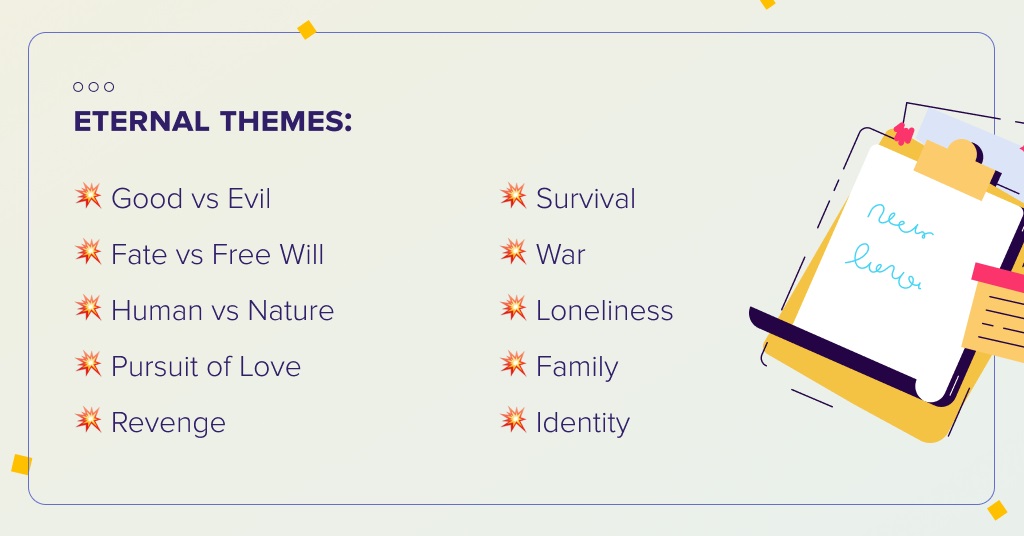 This theme stretches even beyond Biblical times. It’s the classic battle between light and dark, a kind protagonist and cruel antagonist. And usually, good triumphs over evil.

In brief: There’s no escaping one’s destiny. The protagonist can do anything: run, fight, or cheat. But his fate is sealed.

Humanity is constantly developing and reaching new heights of civilization. But it is still nothing before the force of nature.

Whatever we say, love makes the world go round. Many people dream of finding true love, but it’s not always easy.

Revenge is a powerful feeling that gives strength to fight enemies. However, is it always worth it? Can revenge beget justice?

Such stories show the real human possibilities on the border with various dangers and even death. Sometimes the hero does not even know he can do such a thing.

Unfortunately, war has haunted people since the beginning of the world. It causes many dangerous trials and leaves fatal consequences.

Sooner or later, everyone feels lonely. Such stories show how the heroes cope with this feeling and whether man can survive this disconnection from others.

A person can love their relatives endlessly, but it does not cancel the fact that sometimes difficulties and negative feelings arise. However, the family can overcome everything together.

At a specific moment in their life, the protagonist asks: Who am I? And events in the story help the hero find the answer.

If you’ve chosen the theme, it’s time for the second step: Decide on a genre. It determines what settings to select and how your story will develop.

Finally, if you want to find out what to write about, try remembering some moments from your childhood, youth, or other period related to the theme. Memories will make your book vivid and realistic for the readers.

If you’ve read the book Steal Like An Artist by Austin Kleon, you know it’s pretty normal to snoop on other authors to boost your creativity. After all, you’re not going to steal their works literally, but just get inspired and create something unique.

So, here’s one more way to develop a book idea. First, you must make up a list of your favorite stories (books, movies, whatever). It can include 5, 10, 20, or more titles. Secondly, consider what you like about each story: Genre, character, plot, or theme. Finally, mix elements from the books to get a new unique concept.

Let’s see how it works in practice. For example, our list includes such books:

Now, we have to mix the elements of these stories:

It’s time to stir things up and see what concept we can get:

The protagonist was born in a city on an island ruled by an evil and cruel lord. Growing up, the hero meets the love of his life and gets married. However, the main character’s wife dies because of the ruthless lord. The hero vows to avenge her death and raise children with a sense of revenge in their hearts.

Thus, you invent more and more concepts using this method.

3. Play with a random choice

It’s time to sit back and leave it to the fates: Play with a random choice. There are several ways to do it.

Use an online generator

You can visit Random Plot Generator or Plot Generator, and also just google such a tool. For the best result, combine several random plot lines or press the generate button until you find a fantastic idea.

The best way is to gather a big company of friends. The first will tell you a genre; the second will choose a location; the third will name characters, and so on. And all you need is to make up a story using these elements.

Make a board game

Use our table below to come up with a book idea. Download and print it. Then you have to cut out elements and sort them according to their intent. Finally, draw a genre, protagonist, antagonist, location, and theme at random. For example, your new concept may sound like:

A horror story about a lonely old lady who got lost on an unexplored planet. Moreover, she has to defeat a serial killer there. 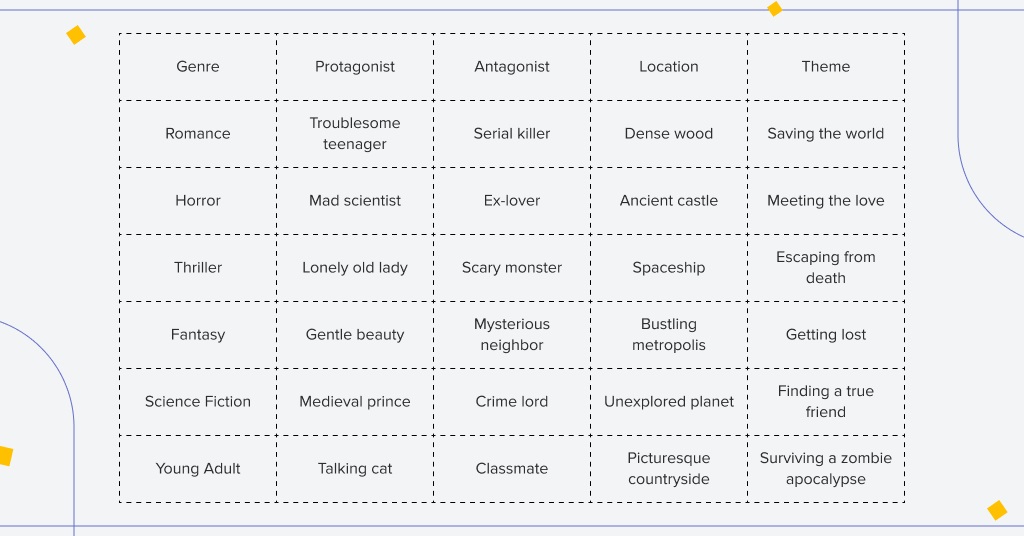 Indeed, you can use our table or make your own with more options. By the way, we have created a character-building template that will help you come up with a character description.

Imagine what will happen to someone if some events occur. The main thing here is to give your imagination as much freedom as possible. The craziest idea will help to write the best book. There are some examples for inspiration:

Again, you don’t have to invent something entirely new. Take a well-known fairytale, ancient myth, or even historical event and rewrite it. Here, you can:

Honestly, there are many examples of famous books where writers used this method:

Well, we figured out how to quickly develop a terrific book idea. But what if we told you that you could create an endless source of plots for the future? In this way, you will not only have ideas for all occasions but also endless inspiration. Are you interested?

Neil Gaiman, a famous author, says that all writers must have a compost heap. In gardening, it means a place where you throw all of the garden and the kitchen rubbish. Then it rots down, and you receive excellent fertilization to grow lovely flowers and tasty vegetables. 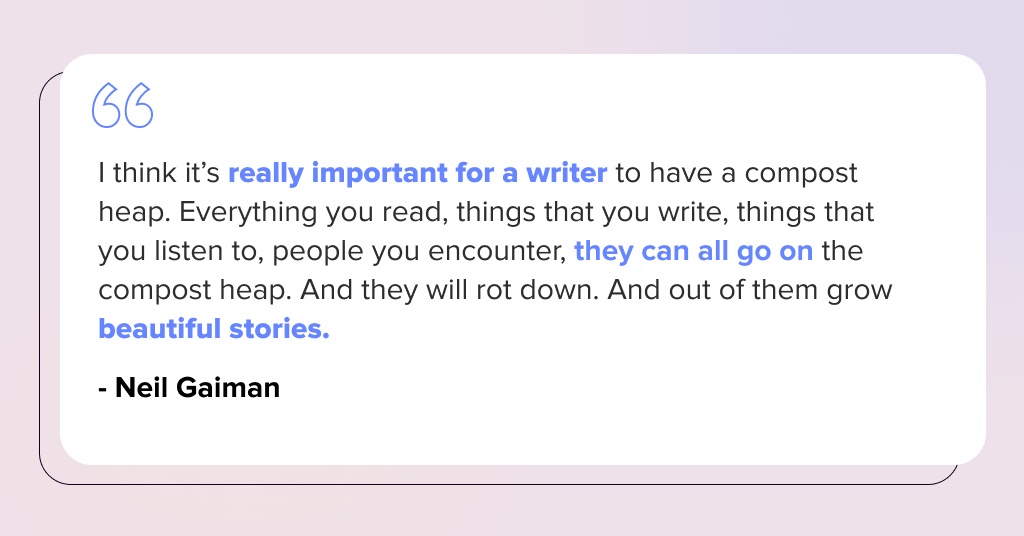 Speaking about writing, the compost heap means collecting everything that inspires you to create stories. You should put such things in one place, for example, a notebook. Write down sudden plots that appear in your head, overheard dialogues, and extraordinary people you meet on the street. Maybe, now you don’t know what to do with these things. But let them rot, and you will find a way to come up with a great book idea in the future.

Good writers should keep diaries. For example, the great English writer Virginia Woolf kept a diary from age 14 until four days before her suicide in 1941.

Writing a diary isn’t only an effective way to overcome writer’s block. The point is that real life and personal events are excellent sources for stories. You may forget how that lovely summer evening has felt and smelled, but the diary will not.

If you’ve been keeping a diary for many years, it’s exciting to see how you and your thoughts have changed. You can use this authentic experience to describe the character’s transformation and development. 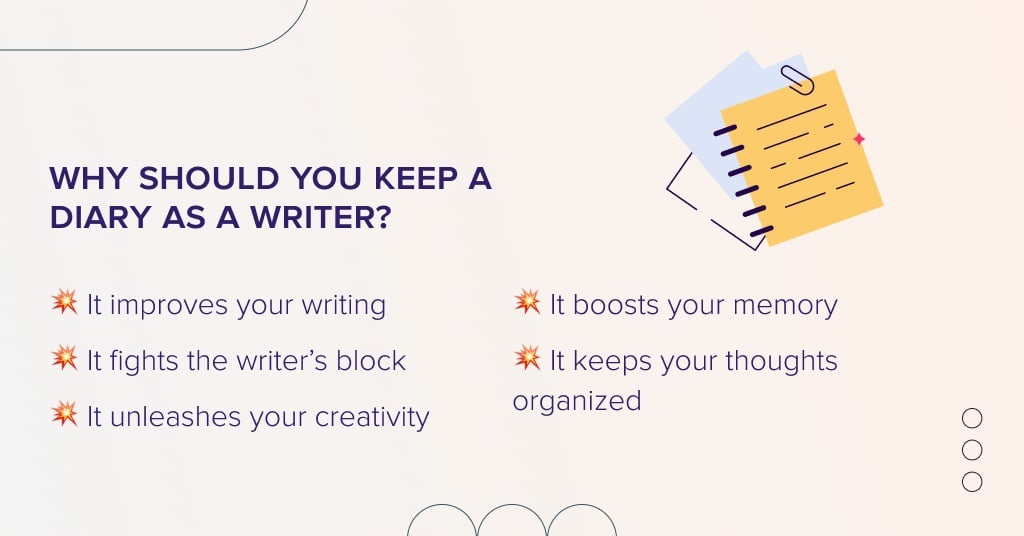 Whew, what a tense, creative process we’ve just had! No matter what anyone says, inventing new book ideas is exciting and addictive.

The next time you come up with a book idea, don’t be afraid to refer to the works of other authors. Combine several stories into a new unique one. You can also always use one of the timeless literary themes. And if this does not help, remember such an effective tool as random choice (try an online plot generator or draw story elements at venture using our table).

As an author, you should capture everything that inspires and makes you think. To do this, always carry a notebook and keep a diary. Who knows, maybe an accidentally overheard conversation will become the basis for a new bestseller.

And what method of coming up with a book idea did you like the most? Please share with us in the comments.