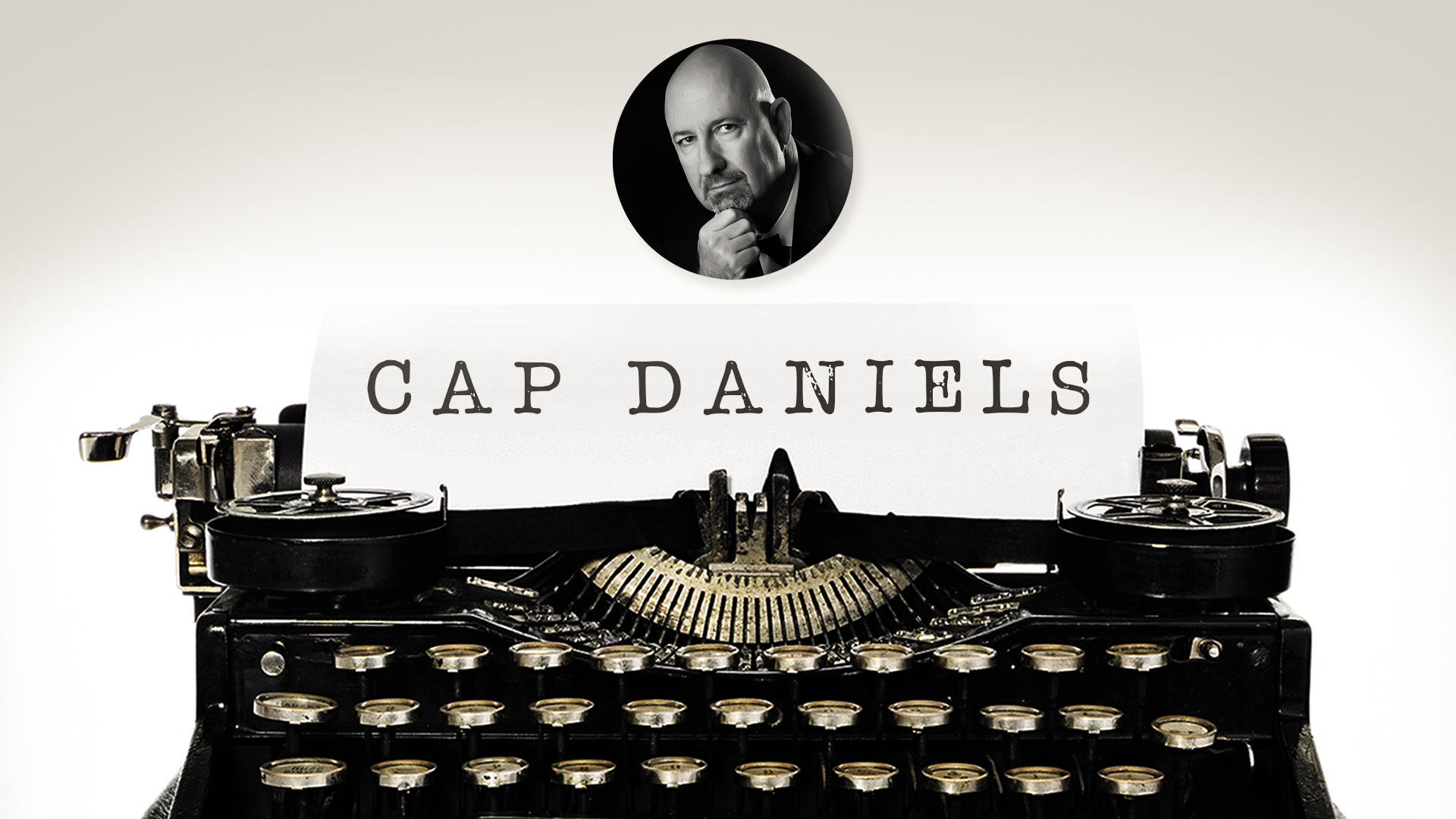 What is Self-Publishing About: Interview with Cap Daniels

When you lack inspiration, the best way to find it is to learn from the expert’s experience. In our interview with Cap Daniels, you can find loads of interesting tips and insights on how to overcome hurdles and succeed as an indie author.

Cap Daniels is a former sailing charter captain, scuba and sailing instructor, pilot, Air Force combat veteran, and civil servant of the U.S. Department of Defense. With a head full of larger-than-life characters and their thrilling exploits, Cap pours his love of adventure and passion for the ocean onto the pages of The Chase Fulton Series.

Fancy to find out what we’ve talked about?

Cap, let’s get back in time to the moment you decided to write your first book. When was it? What induced you to start working on your first manuscript?

I’ve loved writing most of my life, so it was a goal of mine to become a published author by the time I turned thirty-five. I missed that deadline by a few years, but in many ways, I’m glad I did. At fifty, I have enjoyed far more life experience and matured a great deal since my mid-thirties. I’m a much better storyteller and writer now than I would’ve been back then.

I can’t honestly say there was one moment when I made the conscious decision to become a novelist. By the time my first serious work was published in 2018, I’d written hundreds, if not thousands, of short stories, articles, and portions of novels. The Opening Chase, the book that became book #1 in my Chase Fulton Novels series, was originally written as a stand-alone novel. I wrote that manuscript over a period of approximately three years, and it was terrible. My editor convinced me to rewrite the ending so it could potentially become a series. Thankfully, I took her advice and now have one of the hottest selling espionage series on Amazon.

Do you face writing blocks? If so, how do you struggle with them, and what helps you stay motivated?

I’m going to catch a lot of flack for my answer to this question, but I don’t believe writer’s block exists. I believe it’s an excuse used by writers who are either procrastinating or choose to prioritize things other than their writing. There are times the story I’m writing doesn’t flow as easily as I’d like, but I’ve never experienced a time when I was unable to write something. When I encounter what some people call “writer’s block,” I don’t stop writing. I write something, anything, because I’m a writer, and writing is what writers do. It may be garbage and have nothing to do with the story I’m trying to create, but I write whatever comes out of my head. Often, I delete it and return to my work in progress, but keeping the creativity flowing and the habitual writing happening is what makes writers successful.

Succumbing to procrastination or hurdles are the things that keep people from becoming great novelists. It is a lonely, sometimes anguishing task, but putting in those hours in front of the keyboard every day, just like professional bodybuilders put in hours at the gym, is what serious writers do to fulfill our dreams of becoming professional novelists. Writer’s block is almost always the result of a condition known as LOBIC (Lack of Butt in Chair) disorder.

What marketing channels do you use for book promotion? Do they vary depending on the release of the book in your series?

I’ve experimented with a variety of advertising avenues, but I’ve found the most bang-for-my-buck in well-targeted Facebook advertising. I spend some money with Amazon Marketing Service and the dozens of other online services, but by far, the bulk of my ad money is spent on Facebook. I bought and studied Mark Dawson’s Ads for Authors course last year and found it to be a remarkable piece of work. Mark is a brilliant writer and businessman, so it only makes sense to take the advice of those who’ve been successful.

How do you come up with the concept of your book cover design?

Never judge a book by its cover is the worst concept imaginable for a writer. Nearly everyone judges books by their covers. Otherwise, there would be no such thing as a professional cover designer. The proper cover design is crucial in a writer’s success.

Early on, and with the help of my editor, I decided on a color palette and layout theme for the covers in my series. I chose the deep oranges and browns of the sunset behind a dramatic, singular object relating to the story of each book. I’ve used a sailboat, the beautiful Bridge of Lions in St. Augustine, Florida, the skyline of St. Petersburg, Russia, a submarine, a cannon, and a WWII P-51 Mustang for my latest cover.

At a glance, it’s easy to pick out my books as being part of the series. Before the creation of my first cover, I spent a couple of hours in my local bookstore making notes on covers I liked and disliked. I highly recommend that technique, especially for first-time writers. It’s important to be proud to hold your book in your hand and claim it as your own, and the cover plays an enormous part in that process. Most of all, unless you’re a professional graphic artist, it is so important to hire a professional cover designer. That all-important first impression is vital to the commercial success of our work, and no one plays a bigger role in that first impression than the cover designer.

Tell us about your off-line course “Becoming a Novelist,” who is it for, and what value does it bring to authors?

In my first two years as a novelist, two wonderful writers, Wayne Stinnett and Dawn Lee McKenna, took me under their wings and taught me things I could’ve spent a lifetime learning without them. They were enormously generous with their time, wisdom, experience, and encouragement. I would not be enjoying the wonderful success I’ve experienced without these amazing mentors who’ve become dear friends. The only request they had of me was to do the same for other fledgling writers when I reached the level of success to be able to do so. To me, it is the responsibility and great privilege of commercially successful writers to lend a hand and share what we’ve learned with others who are serious about becoming writers.

Writers are not competitors. We are colleagues. Readers devour our work at a pace and with an appetite we could never fulfill as individual writers. Many of my readers power through my novels in a day or two, so there’s no way I could write fast enough to satisfy them. As writers, we have to work together to feed the voracious appetites of our readers, so helping others become successful writers is a service to my readers. I love teaching and sharing what I’ve learned with other writers.

For me, the monthly Becoming a Novelist course is simply a gathering of like-minded, creative people who are in love with the craft of writing and who want to turn it into a profession. The sessions are extremely informal and completely driven by the desires of the attendees. We talk about whatever they want. I start every session with a rough outline, but so far, we’ve never adhered to it. It turns into two hours of sharing experiences and learning from each other.

By the way, I have some incredibly talented young writers in the class who will soon produce amazing stories that you’ll fall in love with. I believe many of them will become household names in the years to come.

Cap, we know that the release of your The Chase Fulton Novels is around the corner. Can you please describe what is so special about these books, and what audience are they for?

Actually, at the time of this interview, there are nine full-length novels and one prequel novella in the series already on the market, with a new release every ninety days. The series is based on the exploits of a young American covert operative learning his way in the world of espionage. The series is a celebration of the bravery, selfless service, and patriotism of the thousands of astonishing men and women who serve America’s security interests in the shadows, and whose names we’ll never hear. Freedom is the greatest desire and most basic of rights of humanity; therefore, the dedication of one’s life to the preservation of freedom is the greatest gift anyone could ever give to his fellow man. Freedom exists because men and women of exceptional valor willingly stand between humanity and the wolves at the gate, beating back those wolves, and in many cases, sacrifice their own lives to do so. Those heroes deserve our respect and gratitude. That belief is at the core of every word I write in The Chase Fulton Novels series.

What is your secret to becoming a best-selling author? Can you give some advice to other writers on gaining success like yours?

My answer to this question is terribly boring, but it is ultimately true. There is no secret. To become a best-selling author, one must be willing to devote thousands of hours of time in front of a keyboard, hammering out the words every day. It’s a demanding and brutal profession. Self-discipline, determination, passion, drive, and the ability to ignore rejection and distractions are absolute requirements of the job, but they aren’t enough. There is something intangible, something that can’t be taught, an element beyond description or definition that exists inside every successful writer.

Those who rise to the top of the millions of people who claim to want to be writers possess something inside themselves that is almost an element of magic. I could never play professional baseball or sell a hundred million albums like Elton John or Jay-Z, but I write half a million words of fiction every year that earn me a more-than-comfortable income and fulfill a lifelong dream. Something sets a true storyteller apart from those millions of people who fantasize about seeing their names on the cover of a book. Part of it is the elements of hard work, determination, etc., but there’s something more inside people like James Patterson, Stephen King, and J. K. Rowling. Maybe that magical thing is inside you as well, but you’ll never know unless you put your butt in the chair and write.

Cap, I’m honored to have such a great conversation. There are lots of helpful ideas in this interview to be used right away.

Want to get a FREE book cover design idea?
Contact us and get ideas that will work for your target audience.
Get a free idea
Enjoyed the post?
Subscribe to our newsletter and get a FREE CHECKLIST with 50 websites where you can promote your book.